We are a leading solution provider

For more information get in touch with us
get in touch
Got any Questions?
Call us Today!
+(91) 9118219118
sales@brisechemicals.com How Does a Hydrogen Electrolyzer Work?

The water electrolyzer is a device that generates hydrogen and oxygen from the water through the application of electricity. It consists series of porous graphite plates through which water flows while a low voltage direct current is applied. A water electrolyzer stack consists of several cells linked in series.

These cells are of two types namely monopolar and bipolar cells

In the monopolar design, the electrodes are either negative or positive with the parallel electrical connection of the individual cells (Fig.A), while in the bipolar design the individual cells are linked in series electrically and geometrically (Fig.B).and it is the most preferred option for water electrolyzer manufacturers. One advantage of the bipolar cell design is that they are more compact than monopolar systems which give shorter current paths in the electrical wires and electrodes. This reduces the losses due to the internal ohmic resistance of the electrolyte and therefore increases the electrolyzer efficiency. BRISE Chemicals is hydrogen electrolyzer manufacturers India listed companies 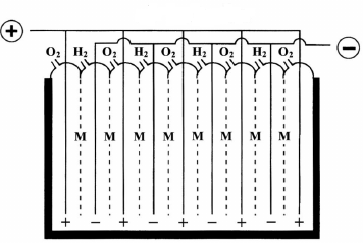 Alkaline water electrolyzer usually use an alkaline solution of sodium or potassium hydroxide (NaOH or KOH) that acts as the electrolyte, mostly with 20-30 wt% because of the optimal conductivity, they require using corrosion-resistant stainless steel to withstand the chemical attack. This electrolyzer operates at a temperature of 70-100°C and at a pressure of 1-30 bar. The following are the two chemical reactions that occur at the anode and cathode, finally resulting in hydrogen production.

BRISE Chemicals is hydrogen electrolyzer manufacturers India listed companies and manufacturer of bipolar water Electrolyzer located at Chakan, Pune, Maharastra, India. In Brise Bipolar design where high purity DM water is broken to H2 and O2 using DC power supplied by the rectifier. Hydrogen is evolved on the cathode side of cells and oxygen on the anodes of cells. The design makes our Electrolyser unit very compact in size. This specially developed cell unit produces gases at high pressure of 0-30 Bar directly. So, no Hydrogen compressor is needed for medium Hydrogen pressure requirements.

In some cases, the oxygen produced in parallel is released into the atmosphere, while in others, it is stored for later use as a medical or industrial gas. The hydrogen is compressed or liquefied and stored for use in industry or in hydrogen fuel cells, which can power vehicles such as trains, ships, and even aircraft.

Get A Free Quote